Bukkilinyya, meaning the “child from the bush”, has grown into a graceful mare since she was found in 2013 as an injured foal.

Do you remember? In November 2013, locals found an injured and abandoned foal in the bush, with an ugly wound on its rear leg. They brought the young horse to Kybrook, an Aboriginal community bordering the Franz Weber Territory. But despite care and attention, the little one could hardly stand on its feet. Upon request, I drove out to Kybrook to have a look at the animal. It looked like an injury from wild dogs or dingoes. After a few days of treatment with medicines from our supplies, the foal started to walk around. The family taking care of the animal called her Bukkilinyya, which means “child from the bush”.

But the dogs had not forgotten the foal. They searched for it and attacked it again. I was called in again and found it covered with bite wounds and brought it to Bonrook Station as requested by the people of Kybrook. Again, wound care and antibiotic treatment followed. And again, the foal recovered well. Surviving two such attacks earned her a nickname: Lucky Lucy.

Trusting and kind
The local foster family from Kybrook that had grown fond of the lovable horse, is happy and grateful that we have taken Lucky Lucy in. Members of the local family from Kybrook regularly come to Bonrook Station, sometimes with up to ten children, to visit their “bush child” and bring her something to nibble on. And the horse is clearly happy too.
Since she was found three years ago, Bukkilinyya has grown into a beautiful mare. The trusting and kind animal currently lives in the stable on the paddock. Sometimes she is allowed to graze around the barns and farm buildings, especially during the rainy season when the vegetation sprouts lushly. That is currently the case. After the first rains of the monsoon season, everything on Bonrook has turned green again. Due to her friendly and fearless nature, she doesn’t mind the noise of vehicles, nor the coming and going of people.

Greetings over the fence
Even dogs don’t upset her. That is amazing after her experiences with dogs as a foal! What remains is a large scar on her rear leg. Bukkilinyya probably dislocated her hip during the second attack by the dogs. Because of her damaged hip and leg tendons, she will always be somewhat handicapped. Unfortunately, the vision in one eye is also limited and has, if anything, worsened over time. Nevertheless, the beautiful mare frolics around the paddock as well as any other horse. We don’t let her into the bush yet, but keep her with the old riding horses. She gets along well with them, even if she is a bit cheeky at times. Bukkilinyya gets along well alone as well as in a mob, while she easily fits into the hierarchy.

Occasionally, groups of wild horses visit the paddocks, friendly greeted over the fence by Bukkilinyya. But running away with them into the wild is not an option for her. Sometimes it seems to me that Bukkilinyya thinks she is actually a human being.

Media Release: Zurich Zoo loses its 6th young elephant in 3 years – a reappraisal is necessary
CITES CoP19: A positive outcome for the conservation of endangered species
Media Release: CITES Places a Moratorium on Live Elephant Exports from Africa
Argentina: Elephants in captivity will soon be the past
All news 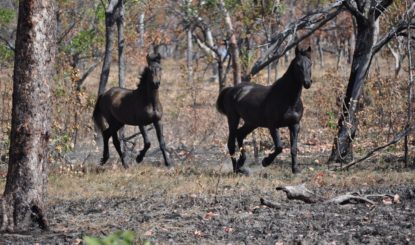