Once again the federal court has agreed with Helvetia Nostra: With two verdicts delivered, the highest court in Switzerland uncovers flagrant abuse of the law and further restricts the construction of „hidden second homes“. Since the Second Home Initiative was adopted on 11 March 2012, Helvetia Nostra has strongly campaigned against the misuse and bypassing of the second homes law in communities with a proportion of second homes that is over 20 per cent.

In two verdicts from 16 January 2018 delivered today, the federal court has backed the appeals made by Helvetia Nostra, a subsidiary of Fondation Franz Weber, against verdicts delivered by the cantonal court of Valais. It repealed the permissions granted by the municipality of Bagnes regarding the construction of two luxury chalets in Verbier, reasoning that it was unlikely that the apartments in question would ever serve as main residences.

The highest Swiss court determines that the projects in question were a matter of „concealed second homes“, which constitutes an abuse of the law. Based on the finding that the fixed number of inhabitants in Verbier fell by 44 people between 2013 and 2016, and that 49 similar properties were put on sale at the same time, the court concluded that the demand for first homes and in particular luxury chalets was not sufficient to justify the project.

The federal court clarified its earlier judgement more precisely, and demands, in the future, that before such construction projects are approved, reliable and specific evidence is presented to demonstrate that the apartments will be purchased by people who will use them year-round. If it is not clear from the outset that the residences will serve as main homes, the construction projects will have to be rejected, because they would not comply with the law. In doing so, the federal court intends to prevent the construction of new buildings whose later use will be disguised.

In 2013, the federal court acknowledged Helvetia Nostra’s legitimate right to file a complaint as well as the legislative character of Art. 75b of the federal constitution. Subsequently, in 2016, the supreme court forbade the construction of around 40 building complexes in Ovronnaz (BGE 142 II 206). Thereupon, the federal court passed strict conditions for the construction of main residences in municipalities in which building already poses an issue. These conditions are also valid when there are only a few apartments.

Helvetia Nostra is delighted at the federal court’s verdict, which puts an end to the negligence of the responsible authorities and makes it impossible for certain municipalities to bypass the law in such a systematic fashion. 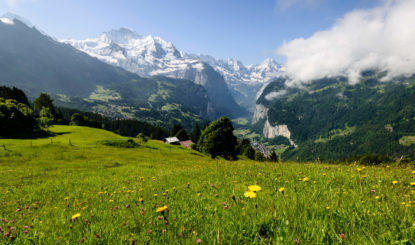