Equidad: Chronicles of a Naturalist

In 2021, I dedicated myself to studying the flora and fauna of the new, 310-hectare Sanctuary Equidad. I was able to identify almost 60 different bird species – twice as many as a previous study found in 2004. Another reason to work day after day on site to protect nature, animals and their habitats.

Witnessing the transitions on the property as the seasons changed was truly magical. I remember a mountain of a luminous green that looked like it had been touched up with a brush. As the days and weeks passed, it turned yellowish to ochre. Then, suddenly, all life seemed to have disappeared. Only bare tree branches remained, and the ground turned into grey, dry earth. I learned to trust the processes at work, the magic of nature. With the first rains, life returned to Equidad: Buds began to sprout on every thorny bush, and the ground gradually turned green again. The sensory experience was complete. With each deep breath, I was overwhelmed by the wonderful scent of Acacia caven that filled the surroundings. While on a walk, the buzzing of thousands of bees attracted all my attention. They were collecting flower nectar from the famous chañar trees, whose bark is used by local communities for its excellent diuretic and expectorant properties, and whose fruits are used to make sweets and drinks.

The Earwigs Are Back
During these metamorphoses, new players that had previously remained hidden made their appearance, including rattlesnakes and coral snakes. Just like ruby tyrants and earwigs, animals that had moved to warmer climates during the first cold snap, gradually returned to our region.

On Equidad, every miracle of nature, no matter how small, gives reason to rejoice: “The earwigs are back!” we exclaimed when we spotted the first specimen of the season. Nature’s gifts. After breakfast, we usually sit on the porch for coffee. This adorable female blue-bearded hummingbird obviously didn’t want to miss our conversation!

When Time Stands Still
Monk parakeets (Myiopsitta monachus) are the only parrot birds in the world that build their nests out of twigs. The other species nest in tree cavities or in the walls of ravines. Monk parakeets build communal nests that can weigh up to 200 kilograms. They prefer to use twigs of native trees, especially those of talas and Acacia caven.

My first encounter with this fascinating bird remains unforgettable. Engrossed in a conversation with the volunteers, I suddenly saw a shadow on a tree: a black woodpecker! I was electrified, grabbed my camera and ran outside. Guided by the drumming of its beak strokes on the trunk, I stalked to get as close as possible to its majestic red crest. As I did so, I smiled. It was as if time stood still to give me this moment. A few seconds later, my graceful model flew to another tree. The sound of its beak strokes gradually faded until it disappeared completely behind the mountain.

Endangered “Lampalagua”
On a hike to the border of the property, I made the acquaintance of a beautiful snake that I had never seen before. It was a very hot day, so I decided to rest in the shade under a tree. Feeling I was being watched, I turned my head. Just a few meters away from me, a magnificent ringed “Lampalagua” was basking. Overwhelmed with gratitude, I could not believe my eyes. My first encounter with this snake species!

Irrespective of its impressive size, the “Lampalagua” (Boa constrictor occidentalis) is endangered. Like most wild animals, it faces habitat destruction. For a long time it was hunted for its skin for the leather industry. It still falls victim to illegal captures that serve the trend for new “pets”.

Considered a predator for small livestock, they also regularly suffer the vengeful wrath of farmers, even though hunting them is prohibited. The “Lampalagua” is listed in Appendix I of CITES (Convention on International Trade in Endangered Species of Wild Fauna and Flora). On this pessimistic note, I console myself with the thought that at least this one was able to find refuge and protection at the Sanctuary Equidad.

Camera Trap For Small Spotted Cat
During my forays around the property, I was able to identify footprints and droppings of a small, rare wild cat. To confirm its presence, I set up a so-called camera trap. I placed my camera, which activates automatically when motion is detected, at a strategically good point. Thus, I managed to observe the nightlife of the mountain animals and to prove the presence of the small spotted cat.

Every morning I was excited anew: With a tingle in my stomach, I took out the memory card of my camera to find out what had happened the night before. That’s how I was able to obtain photos and videos of brown hares (Lepus europaeus), grey foxes (Lycalopex griseus), Andean skunks (Conepatus chinga), various birds and, of course, small spotted cats. What unique and enriching discoveries!

Safe Haven Equidad
The unique wildlife that I was privileged to observe at the Sanctuary Equidad is endangered. The Córdoba Mountains, affected by deforestation and fires, are not immune to the global decline of ecosystems. It is certain that the native species living there have been severely affected in recent years by the unstoppable disappearance of their habitats.

That’s why, the 300-hectare land of Sanctuary Equidad is extremely important. It’s a safe haven and provides refuge not only for abused domestic animals, but equally for the native flora and fauna, where many species are threatened with extinction!

Eleven Years of Campaigning For a Better Life For Humans and Horses
Spring at Equidad: Impressions of an Unforgettable Visit
Move at Equidad – A First Glimpse of Paradise
Equidad Is Moving: It Was About Time
All news 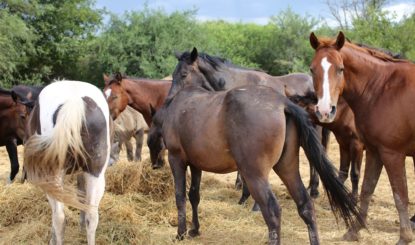