With an unprecedented fundraising campaign “Giessbach dem Schweizervolk” (Giessbach for the Swiss People) Franz Weber saved the historic Grandhotel Giessbach above Lake Brienz, which was to be demolished. He initiated a change in thinking about the preservation of historic hotels. 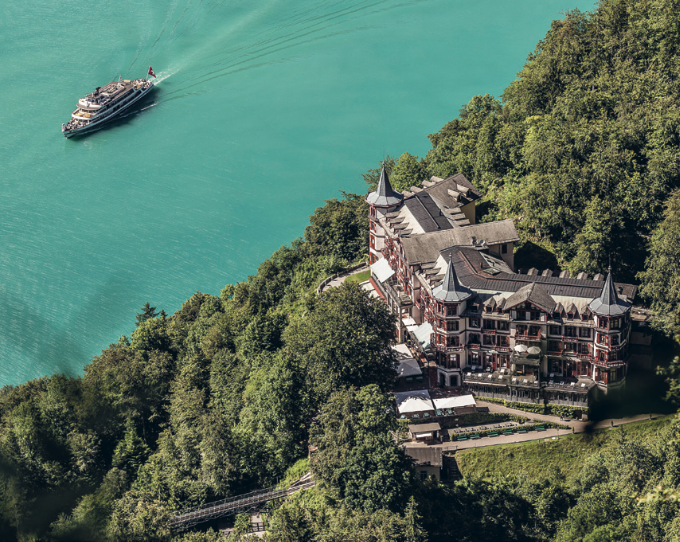 The Grandhotel was built in 1874/75 at the famous Giessbach Falls above Lake Brienz in the Bernese Oberland, Switzerland. Two world wars with disastrous consequences for the Swiss hotel industry, as well as a new approach to tourism, faded the glory of the Giessbach, and so the facility closed its doors in 1979. In its place were plans to build a modern concrete building in the style of a “jumbo chalet”.

Rescue came at the last minute in 1983. Thanks to Franz Weber’s remarkable fundraising campaign and his founded “Stiftung Giessbach dem Schweizervolk” (Giessbach Foundation for the Swiss People), he acquired the Giessbach domain with its 22-hectare land property and registered it as a protected monument.

Complete renovation of the hotel took place over several stages. Today, the hotel Giessbach is one of the most beautiful and renowned hotels in the Swiss hospitality industry.

Photo: The magnificent Grandhotel Giessbach above the turquoise Lake Brienz amidst the mountain scenery of the Bernese Oberland.