It is still not completely understood how HIV was originally transmitted to humans. However, numerous studies suggest that direct contact with the blood and secretions of animals as a result of hunting and eating meat from wildlife (so-called ‘bushmeat’) was responsible for the transmission of the virus from primates to humans. Unfortunately, HIV – and AIDS, the disease caused by the HI virus – continue to be a threat to public health worldwide, especially in developing countries. 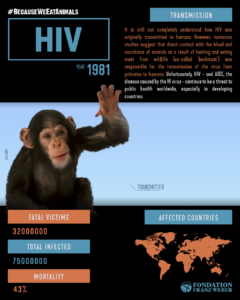 Origin: An initial zoonotic event may have transmitted the virus from animals to humans. It is thought that AIDS originated in Africa, where a number of primates host the simian immunodeficiency virus (SIV), which is similar to the human immunodeficiency virus (HIV).
It is not quite clear how HIV made the jump from animals to humans, but it probably occurred through the preparation and consumption of wild animals (Fehervari 2018). Thus, many studies suggest that direct exposure to animal blood and secretions as a result of hunting, eating wild animal meat (bush meat), poor butchery practices and other activities (such as the consumption of uncooked, contaminated meat) are a highly plausible explanation for the virus being transmitted from primates to humans (Hahn et al. 2000).

Country: HIV was contained in small populations for a number of decades until the right circumstances presented themselves for a rapid spread: firstly sweeping through the African continent and then the rest of the world. The pandemic spread from Africa to Haiti, most likely in the 1960s. From there, it spread to the United States and then to the rest of the world (Thomas et al., 2007).

Year: In 1981, the first cases of an unknown fatal disease, later known as AIDS, were reported in the USA (Starling 2018).

Fatality: AIDS is the leading infectious cause of death in adults in the world. If left untreated, the disease caused by HIV has a case fatality rate of nearly 100 %. Not since the bubonic plague of the 14th century has a pathogenic agent wreaked such havoc (WHO). Although fatality rates for the disease have fallen by 33 % since 2010 (UNAIDS), at the end of 2018 the official death toll caused by AIDS-related illnesses stood at 770,000.

Symptoms: Infection via HIV leads to a progressive deficiency in the immune system, causing a range of symptoms and infections. People with HIV generally do not present with symptoms immediately. The first symptoms may be fever, headache, diarrhoea, mouth ulcers, inflammation of the lymph nodes, muscle pain, weight loss, etc. Some opportunistic infectious diseases that may take hold as the patient weakens include tuberculosis, herpes, oral and vaginal candidiasis, Kaposi’s sarcoma, lymphoma, pneumonia, meningitis, encephalitis, carcinoma, among others (UNAIDS).

Generally, the culture of eating wild animals is still common (COVID-19 and the Culture of Eating Wild Animals in Central Africa, 2020). That being said, due to Covid-19, Malawi has banned the trade of wild animal meat as a preventative measure (Malawi bans bushmeat, Nuassa Times, )

Bor, J. (2007) analyses 54 developing countries, and concludes that the commitment of government leaders is widely recognised as a key factor in curbing national AIDS epidemics. Measures such as freedom of the press, income equality and the HIV prevalence stand out as determinants of political commitment.

Results in Kenya show GDP losses of between 20 and 30 % for the 2000–2020 period (Robalino et al. 2002). In Malawi (Cuddington, J. and Hancoch, J. (1994), a growth model was used to simulate the impact of AIDS on output capacity and other key macroeconomic aggregates; the size of the economy by the year 2010 was reduced. The estimated annual cost of HIV/AIDS in India appears to be approximately 1 % of the GDP, between the cost of treating the disease and productivity loss, although other costs associated with HIV were not taken into account (Anand,K., Pandaw,C.S and Nath, L.M, 1999).