The first infection with the AH5N1 virus was caused by contact with live chickens at an animal market in Hong Kong. Epidemiological analysis has determined that domestic poultry farming is also a risk factor for infections. Due to the high associated mortality and the immense potential of this type of virus to mutate and adapt to other hosts, H5N1 remains a global public health threat today. 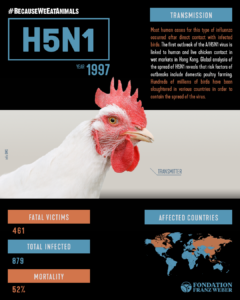 Origin: The influenza produced in humans by the virus AH5N1 is a zoonotic disease, meaning that it is transmitted from animals to humans. Most human infections with avian influenza viruses, including the virus H5N1, have occurred after prolonged and close contact with infected birds, or through environments contaminated by domesticated birds (CDC). The 1997 AH5N1 outbreak was linked to contact with chickens in live animal markets (Van Kerkhove et al., 2011). Global epidemiological analysis of AH5N1 outbreaks up to 2015 also describes the domestic exploitation of birds as a risk factor (Lai et al., 2016). Due to the increased case fatality rates associated with these viruses, and their huge potential for mutation and adaption to other hosts, H5N1 is still considered a threat to public health today (CDC).

Country: The first case of the disease in humans was detected in 1997 in Hong Kong (China), subsequently spreading to Asia, Africa, Europe and the Middle East (CDC).

Fatality: Among all the avian flu viruses, which normally only cause infection in birds and pigs, strain H5N1 may have a unique capacity to cause serious illness in humans, with a high mortality rate. Millions of birds were culled to contain the virus. One example in Europe occurred in the Netherlands, where 30 million poultry birds were slaughtered after an outbreak affected 89 people in 2003 (WHO). Between 2003 and 2020, 861 confirmed cases of people infected with the virus and 455 deaths were reported to the World Health Organisation (WHO).

Symptoms: High fever, cough, dyspnea (shortness of breath) or difficulty breathing. Other symptoms include diarrhoea, vomiting, abdominal pain, bleeding from the nose or gums, and chest pain. Complications of infection include hypoxemia (low blood oxygen), multiple organ failure and secondary bacterial and fungal infections, which may lead to death. The case fatality rate for A(H5) subtype virus infections in humans is much higher than that of seasonal flu infections (WHO).

Avian influenza, like other transboundary diseases caused by animals, has wide-ranging repercussions on the livelihoods of smallholders and poultry farmers, not to mention regional and international trade, public health and international tourism (FAO). The spread of the virus hit countries in South East Asia particularly hard: rural populations in this region variously represent up to 70 % of the national population, as in the case of Indonesia. There, avian flu had a devastating effect on their work: 30 % of jobs among small-scale animal-rearing farms and poultry farms (CEPAL, 2006) were destroyed. Avian influenza affects all social strata and has an impact on long-term sustainability in the poultry sector (FAO).

Various countries imposed continuing bans on bird imports as a result of avian flu outbreaks. This included bans on importing poultry and poultry products, as well as bans on ornamental birds, in the European Union (UE).

In South East Asian countries, various social and economic impacts were felt: chicken supply fell while the price of other meats rose. Broiler traders had to wait up to three years to recoup their losses and egg traders nearly one year. The demand for day-old chicks fell by 45 to 60 %, and employment in the poultry industry fell by over a third (FAO).

The IMF & World Bank warned that the disease could potentially tear the global fabric of finance and production. For this reason, the Fund insisted that the benefits of reducing the threat justify the costs of preparing for a pandemic. The World Bank also estimated that an outbreak of avian flu could cost USD 800 billion, equivalent to 2 % of global economic output (Kwo Ghsiao et.al., 2007). Furthermore, it is estimated that by the end of 2005 governments had invested over USD 6 billion in stockpiling medicines and antiviral vaccines (Newcomb, 2006).

Hundreds of millions of birds have been culled in efforts to contain H5N1. Society reacts to outbreaks by buying less chicken, thus prompting sales to fall and the price of birds to decrease. In Korea (Jun Ho Seok et al., 2017), for example, the difference between slaughtering chickens (36 %) and broiler chickens (5.5 %), lead to an increase in egg prices. 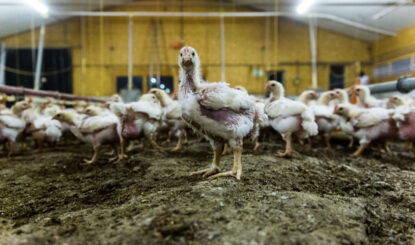