SARS is considered the first pandemic of the 21st century. It clearly showed that the medical and scientific community were not sufficiently prepared for the sudden appearance of highly pathogenic viruses. It is now known that the coronavirus SARS-CoV was first transmitted to humans on a so-called ‘wet market’ (a traditional Asian meat market) in Hong Kong after they came into contact with masked palm civets. Such markets provide excellent conditions for this type of virus to amplify, mutate and transmit to new hosts. 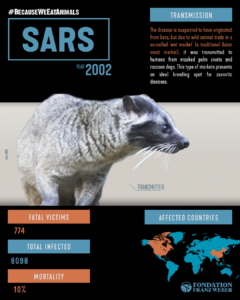 Origin: SARS is a zoonotic disease, meaning that it is transmitted from animals to humans. It is caused by the coronavirus SARS-CoV. It most likely originated in bats (Yuan et al., 2010), but reached the human population through other animals, the most likely candidates being the masked palm civet (Paguma larvata), the Chinese ferret badger (Melogale moschata) and the raccoon dog (Nyctereutes procyonoides) (Guan et al., 2003). According to Guan et al. (2003), live animal markets provide a space where this kind of virus can amplify and be transmitted to new hosts. Animal to human transmission most probably happens through close contact with the animals (Wuang et al., 2005). In fact, epidemiological studies have shown that the civet was the direct source for SARS-CoV (Wuang et al., 2005).

SARS is considered the first pandemic of the 21st century. It underlined the fact that the medical and scientific community were not adequately prepared for the emergence of a highly pathogenic virus. In fact, several months and several thousand cases went by before the causative agent was identified as the coronavirus SARS (de Wit et al., 2016).

Although identifying the geographic origin of a virus is important for controlling an epidemic, belabouring the point runs contrary to bioethics, as it creates a generalised antipathy towards certain populations and may expose them to different types of violence (Schram, 2003). In Toronto, Canada, 44 people died from SARS in 2003. This triggered an initial wave of racism, which has resurfaced in the Covid-19 crisis against Asian people around the world. Chinese restaurants and shops in Toronto reported economic losses of between 80 % and 90 % during the first quarter of 2003, and some inhabitants of China Town in the city were subjected to various types of aggression, according to a report from CBC News.

The distinctive features of SARS resulted in the service sector being severely affected in some regions of China. From January to May, the unemployment rate in Hong Kong rose from 7.2 % to 8.3 %, mainly in the hotel and tourism industry. In addition, foreign investment was projected to rise by 60 % in March. However, after the SARS situation became public, this projection fell to 18 % in May (Keogh and Smith, 2003).

A more complete macroeconomic model needs to be developed; it must be able to provide a more accurate estimation of the costs and impact of the global response to international outbreaks. In any case, the majority of costs related to a pandemic outbreak are likely to occur in the non-health sectors. For this reason, an accurate macroeconomic model of the economic impact of infectious diseases across sectors and countries is required (Keogh-Brown and Smith, 2008).