According to the OIE (World Organisation for Animal Health), the ebola virus was transmitted to humans via contact with wild animals, through activities such as hunting or eating uncooked animal meat
Due to this so-called zoonosis, thousands of people have since been infected with the virus. 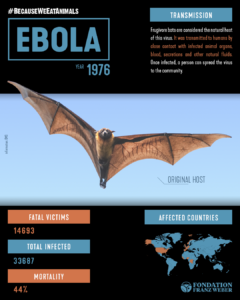 Origin: Ebola is a zoonotic disease, meaning that it is transmitted from animals to humans. The data suggests that fruit bats (of the Pteropodidae family) could be the original hosts (Han et al. 2015). According to the OIE (World Organisation for Animal Health), the ebola virus was transmitted to humans via contact with wild animals, through activities such as hunting or eating uncooked animal meat (OIE). In fact, the ebola virus has been detected in species such as non-human primates and small wild antelopes called duikers.

Country: Congo and Sudan, simultaneously. Other later outbreaks have affected nearby countries, such as Guinea, Sierra Leona and Liberia.

There are ways to treat the virus and ensure the patient’s survival, but there is no widespread vaccine to date. However, a trial vaccine was successfully carried out on a sample of 12,000 people in Guinea in 2015.

Ebola outbreaks have persisted mainly in highly poverty-stricken regions, where precarious agriculture and livestock farming occurs on the edges of the forests. Once the virus is acquired, it spreads fast amidst the humanitarian crises that routinely batter these areas. In Sierra Leone, the disease was acquired by an alarming number of agricultural workers trading basic food items in the main districts of the country, thus reducing the range of available foods in some areas by a significant margin (Glennerster and Suri, 2014). As of October 2014, household incomes fell by 29.7 % in Sierra Leona as a result of the ebola outbreak (ACAPS, 2014). A study in September 2014 suggested that 97 % of household incomes in the region most affected by ebola had dropped since May of that same year (Welthungerhlife, 2014).