The aquarium industry poses a serious threat to ornamental coral reef fishes throughout the oceans. Yet there are hardly any regulations, controls or information on the impact of this trade on species and marine ecosystems. The CITES Conference of the Parties (CoP18), today approved a proposal by Switzerland, the European Union and the United States to rectify this situation, and to produce a comprehensive study on the aquarium industry, so that measures are taken before it is too late. Fondation Franz Weber applauds this far-sighted and import decision.

GENEVA.There are around 1,000 public aquariums in the world and at least 2 million private aquarium owners. The only way the industry’s demand can be met is to continue taking more fishes from the coral reefs. This is because the majority of marine ornamental fishes do not reproduce in captivity that, incidentally, proves that fishes should not be in captivity in the first place.

Coral reef fishes, prized by aquariums, are often caught in the wild using illegal poisons such as cyanide. Not only is the survival rate during capture and transport very low (almost 80% of animals can die before arriving in the aquarium), but natural habitats also suffer in the process.

Despite the magnitude of this industry, which reaches an excess of US$ 1.5 billion each year, there is virtually no regulation. Only one group of species, seahorses, and two species of fishes (the napoleon fish and clarion angelfish) are protected by CITES. In addition, accurate data on the volume of trade, the species affected and impacts on ecosystems are severely lacking. Dr. Monica V. Biondo, marine biologist for Fondation Franz Weber (FFW), which has been an observer within CITES for the past 30 years, sums up the situation: “In short, it is not possible today to monitor and control the trade in marine ornamental fish for the aquarium industry, or evaluate its impact. This cannot go on.”

Biondo has published several scientific studies on the ornamental fish trade in Switzerland and in the European Union. Her conclusions highlight the urgency and necessity for more research. As a result of her findings, Switzerland, the European Union and the United States have submitted the document at CoP18, which has just been adopted by consensus, to conduct such research and present its findings at the next CoP (2022) so that measures may be taken to better protect ornamental coral reef fishes from international trade.

The case of the Banggai cardinal fish

The aquarium industry is slowly decimating marine ornamental fish species that are already threatened by habitat loss and pollution. This is particularly the case of the magnificent Banggai cardinal fish, which is endemic to a very small area in Indonesia. Its population has been decimated more than 90% by the high demand of the aquarium trade and is listed as ‘endangered’ by the IUCN Red List. This species was placed on the agenda at the last CITES CoP by the EU (September 2016, Johannesburg), thanks to the scientific research work conducted by FFW. Now, Indonesia has to take protective measure, and report back to CITES for consideration at the next conference (CoP19 in 2022).

Media Release: Zurich Zoo loses its 6th young elephant in 3 years – a reappraisal is necessary
CITES CoP19: A positive outcome for the conservation of endangered species
Media Release: CITES Places a Moratorium on Live Elephant Exports from Africa
Gran Seaflower 2021: A Spark of Hope in The Caribbean
All news 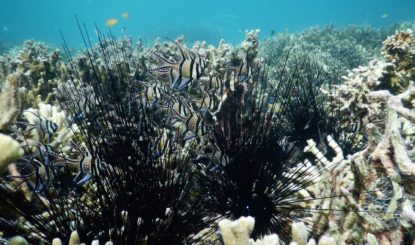