On 21 September 2011, the last bull was tortured to death in a Catalan bullring. The parliament’s previous decision to abolish bullfighting was cheered throughout the world and also led to a new debate: What happens to the bull festivals – called correbous – where the bulls are not killed but are heavily mistreated and tortured?

A bill is now before the Catalan parliament that would abolish three of the four existing forms of correbous. At the same time, the debate about the animal-torturing festival is escalating among the population of affected regions, as several people have published photos and videos documenting this cruelty. These images have triggered a huge wave of outrage on social media as well as in the Catalan media. Hence, the political parties are under massive pressure. This is a good thing! Fondation Franz Weber is working to ensure that the law banning correbous will be in force by 2023.

Today marks the 10th anniversary of the abolition of bullfighting in Catalonia!
Long-time ‘Corrida’ sponsor steps down
Spain: The UN Aims to Protect Minors from the Violence of Bullfighting
The Killing Stroke for Bullfighting in the Balearic Islands!
All news 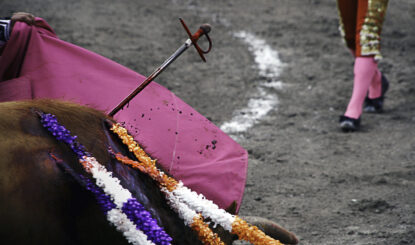