Sars-CoV-2 caused an unprecedented global crisis, despite several early warnings from the scientific community and health authorities at an international level. Research indicates that the virus originates from a wet market in Wuhan, China. It bears a strong similarity to coronaviruses found in bats and pangolins. It is therefore suspected that one of these species may be at the origin of the pandemic. 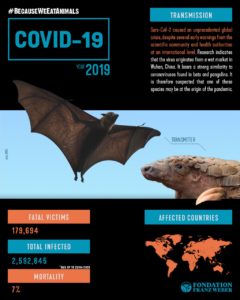 Origin: Although research continues into its origin, Covid-19 appears to be a zoonotic disease caused by a coronavirus, Sars-CoV-2. A zoonotic disease is one that is transmissible from animals to humans. The first detected cases of the coronavirus shared one point in common: a live animal market in the Chinese city of Wuhan, in the Hubei province of China. From this initial epicentre, the epidemic spread globally. Research indicates that Sars-CoV-2 is very similar to other coronaviruses found in bats and pangolins. This suggests that some of these species could be at the root of the pandemic (Zhang, Zu and Zhang, 2020, Andersen et al., 2020).

Country: City of Wuhan, China (Asia). Despite countries restricting travel to and from infected areas, the virus spread across the world.

Symptoms: Infected people may be asymptomatic or present with a range of symptoms varying from very mild to very serious. These include fever, cough, fatigue and dyspnea (shortness of breath). Diarrhoea and other rhinopharynx symptoms such as sneezing, a runny nose and sore throat are less common. The most frequent complications are pneumonia and multiple organ failure which may lead to death. The virus is mainly spread from person to person, predominantly via respiratory droplets produced when an infected person coughs or sneezes. These droplets may reach the mouth or nose of people nearby, and may possibly enter the lungs upon At present there is no vaccine, although tests have been conducted on monkeys who were infected. Following these studies, the first clinical human trials have begun on 108 volunteers from Wuhan, the epicentre of the pandemic.

The coronavirus crisis has been a breaking point in recent history. The European Union has closed its borders for the first time in its history, and many countries across the world have adopted the same policy. The International Labour Organisation (ILO) has given a preliminary assessment on the impact of this situation on the world of work, estimating that close to 25 million people will be unemployed by the end of this crisis (ILO, 2020).

On 25 February 2020, the Chinese authorities announced an unprecedented ban on the consumption of wild animals, designed to reduce the risk to public health (Business Insider, 2020).

On Friday 27 March, the government of India declared a full nationwide lockdown for three weeks. For the first time in history, then, one third of the global population is in quarantine; that’s at least 2,600 million people. Austerity policies on social spending have been put to the test in many countries, and the crisis has triggered a temporary activation of broad investment plans in public health, basic income for society’s impoverished sectors, scientific research and technological innovation. Furthermore, the coronavirus crisis coincided with a crisis in the oil sector ‒ with Saudi Arabia leaving the OPEC and falling petrol prices ‒ causing further uncertainty in the financial sector, which had already been hit by the pandemic (Cherkaoui, M., 2020).

Projections regarding global GDP are also expected to fall. The Organisation for Economic Cooperation and Development (OECD) has downgraded its global GDP forecast, warning that an intense, longer-lasting outbreak could restrict growth to just 1.5 %. On the other hand, a report by UK research firm Oxford Economics posits that a pandemic lasting six months could wipe $1.1 trillion off the expected growth of global GDP (Vaughan (2020) -NewScientist).