ZOOXXI – The first foundation stone has been laid in Barcelona!

Fondation Franz Weber (FFW) has developed a modern zoo project that promotes zoos adapted to current moral values: ZOOXXI. FFW’s efforts have recently borne fruit – ZOOXXI has been adopted for its zoological park by the City of Barcelona. This was a citizen’s initiative, driven by Fondation Franz Weber in collaboration with the animal protection association Libera, which led to a legislative amendment on 3 May 2019. Consequently, this has put an end to the current zoo model in Barcelona.

ZOOXXI in Barcelona – the first step towards the future
This historic victory is the first step in the ZOOXXI campaign. It is an important decision which moves away from the view that nature was created for human domination, bringing us closer to the concept of peaceful cohabitation. The first foundation stone has been laid to build our future.

But what exactly is ZOOXXI?
In an interview I did on Barcelona’s public TV channel, I was asked to define the project in a few words. My response was quite simple: «ZOOXXI is everything that zoos claim to be». Zoos tell us that they are helping «conserve» species and they «inform» and «make people aware» of the problems faced by animals around the world. However, it is quite evident that this is not the case, they have succeeded only in achieving their own self-preservation. They say that they carry out «research», and yet what they learn about animals in captivity can only be used within the framework of captivity. This so-called research does not provide meaningful information on animals’ natural behaviour and requirements in their natural habitats. Zoos talk about «education», but they never question their captivity model. The ZOOXXI campaign aims to reconcile these claims with reality and bring zoos into the twenty-first century.

What does ZOOXXI propose?
ZOOXXI is calling for an environmental, scientific, and ethical revolution – the redevelopment of zoos throughout the world, in order to adapt them to modern science and the moral values of the twenty-first century. The idea is to transform zoos, which are currently and almost exclusively devoted to entertainment, into places that really focus on research, conservation and education. The project is based on five pillars:

Conservation, to give priority to the protection of animals in their natural habitat. This means that zoos must carry out concrete conservation projects in natural environments (in situ), and not restrict their activities to the display of living beings behind bars. In this respect, priority must be given to local and regional species. And, lastly, a conservation-based zoo means that any animal reproduction should only take place in order to reintroduce animals to the wild for the medium or long term.

Science: Each zoo must create a scientific research centre to study the natural behaviour of animals and animal «sentience». Individual
animals have cognitive, emotional capacities and consciousness. The aim is to improve human knowledge of animals and their habitats, while, at the same time, increasing human empathy towards other animal species.

Ethics: Zoos should not restrict themselves to simply «displaying » animals from other parts of the world. They need to be transformed into veritable animal rescue and treatment centres: for the reintroduction of injured and endangered animals, as well as for the care of illegally traded animals seized by the police. An ethical zoo also means that it must give up the practice of culling (the slaughter of «surplus» baby animals) as well as the capture of animals from the wild.

Good Governance, absolute transparency with regard to the methods applied and the underlying decision-making mechanisms is essential. This principle can only be delivered by setting up a scientific and ethical committee that is composed of experts for all species kept in the zoo.

Education: Real education programs that inform visitors of the natural behaviour of animals and that enhance greater empathy towards other species. Education will be provided through new immersive technologies, particularly virtual reality that are closely linked with the concrete in situ conservation projects implemented by the zoo. Zoological parks need to move away from just displaying animals towards the observation of them in their natural habitats.

Protection of species and their natural habitats
According to the latest scientific research, and in accordance with current moral values, animals are sentient beings that have physical and
psychological needs, cognitive and emotional capacities and differing forms of consciousness. There is no doubt that captivity causes suffering for animals, particularly since they are inhibited from expressing their natural behaviour. It is therefore imperative that zoos focus on the protection of species and habitats before thinking about displaying animals to the public. Zoos need to provide each animal with conditions as close as possible to their natural environment.

ZOOXXI completely calls into question zoos’ current model, which is based on business and profit, animal reproduction, and the exchange of animals. The project calls on zoos to orient their activities towards the protection of species and individual animals through conservation programmes in natural environments. The best way to protect biodiversity is to take profound measures to protect habitats.

Not only are such measures becoming increasingly urgent in view of the accelerated disappearance of species and their habitats, but they would also enable zoo visitors to observe natural animal behaviour directly. ZOOXXI proposes that zoos set up scientific and technological centres that will permit visitors, through immersive and interactive experiences, to discover in situ conservation projects implemented by the zoo, and to gain a better understanding of animals’ behaviour in their natural habitats. This way, zoos will play an indisputably important educational role that will enable visitors to adopt new environmentally friendly practices, which ultimately will help protect biodiversity.

No closure of Zoos
With this new model, zoos in the twenty-first century will operate in a network, and, instead of interchanging animals, will exchange images and scientific information from various conservation programmes. They will work closely together – one zoo will protect
a certain natural area, the next zoo will take care of another, and so on. Each zoo will have its own area of responsibility.

The ZOOXXI campaign is determined to avoid the closure of zoos. A report drawn up by the FFW team, in collaboration with other animal associations in Barcelona, shows that the closure of zoos would have a devastating effect on the animals currently in them. In the best-case scenario, such animals would end up in other zoos. Worse, they would be sold to tanneries or exotic restaurants. Only a tiny fraction of the animals are able to be transferred to sanctuaries and reserves, and even a smaller number would be released into the wild. Therefore, the project does not call for the closure of zoos since it would be tantamount to missing a great opportunity to transform them to rescue and research centres that make use of the existing specialists and facilities.

ZOOXXI is the future: it is the best way to address our past mistakes and develop a fruitful relationship between humans and the environment. It is also the best way to build a future based on empathy and sound reason rather than on exploitation and contempt. Now that Barcelona has adopted this ground-breaking initiative, the rest of the world can follow suit. There are thousands of animals that need saving, vast habitats to preserve, and hundreds of zoos to transform. 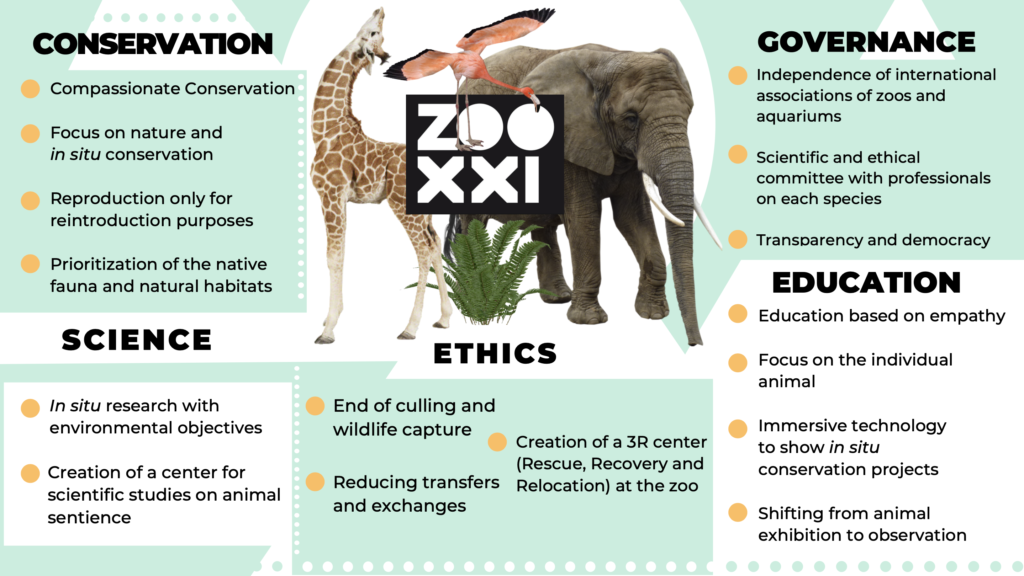